DVSA is responsible for carrying out the annual tests on nearly 1 million heavy vehicles per year. Our 500 testers work from a range of private Authorised Testing Facilities (ATFs) around the country.

Like MOT testers, they make sure vehicles are safe to drive and protect the public from dangerous or defective vehicles. And like them, they find more than their fair share of vehicle horror stories on unsafe lorries, buses and coaches.

DVSA Vehicle Standards Assessor Jim Bithell takes up the story on some vehicles that have failed as a result of lazy labour. 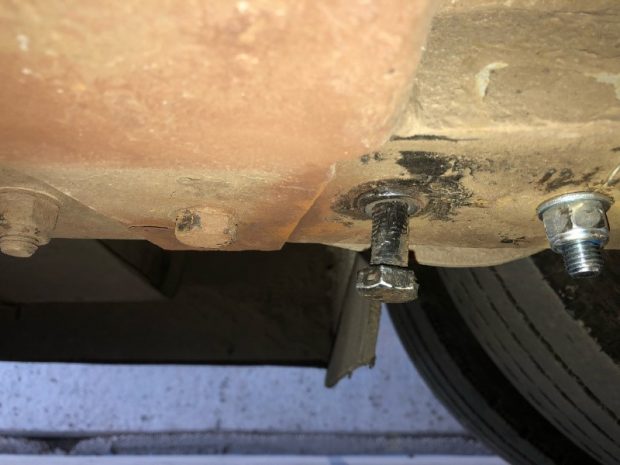 Anyone who’s ever built flat pack furniture knows how to put a bolt in.

But this Passenger Service Vehicle (PSV) operator, decided – for a change – to use glue to fix the bolt holding the rear passenger side suspension leaf spring in place.

Yes, that’s right, glue. On a bus or coach used to carry passengers.

The glue didn’t set, and the bolt fell out while it was being inspected! This would compromise the security of the suspension which may lead to a loss of control of the vehicle. Also, if the bolt had been ejected at speed it may have resulted in a serious/fatal injury to other road users or pedestrians. 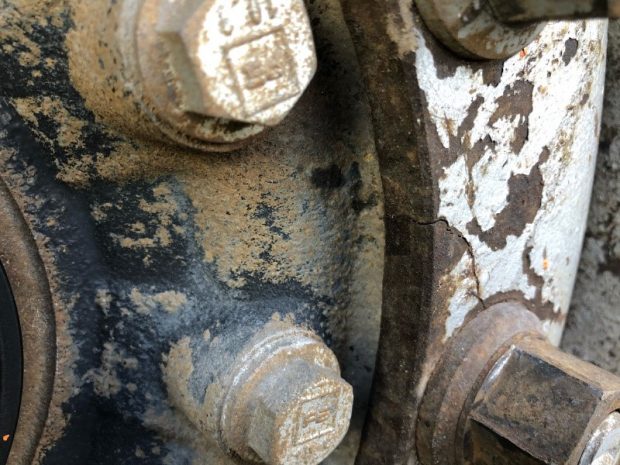 You’d expect a vehicle operator to know the condition of their vehicle. Drivers should also pick up any issues on the daily walkround check of the truck.

Not in this case.

While the paintwork looks untidy and there are signs of rust, the condition of the defect would appear to be longstanding. The crack could have caused the wheel to become insecure. If it happened when the vehicle was moving, the consequences could be deadly…. 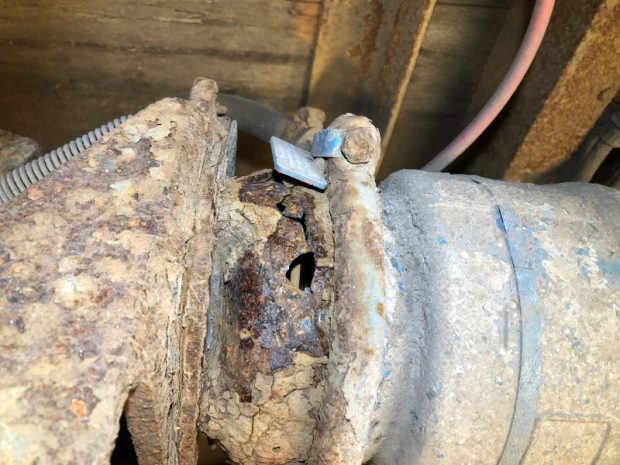 The operator of this tri-axle semi-trailer, part of a 38 tonnes gross vehicle, obviously didn’t want it stopping in a hurry.

38 tonnes takes a lot of stopping. So, your brakes need to be in top condition.

In this case, out of its 6 brake chambers, 4 of were extremely corroded and had started to break up in places. They were ready to fail completely, and the trailer could have instantly lost brakes to 4 out of 6 wheels with the obvious potential for a nasty outcome. 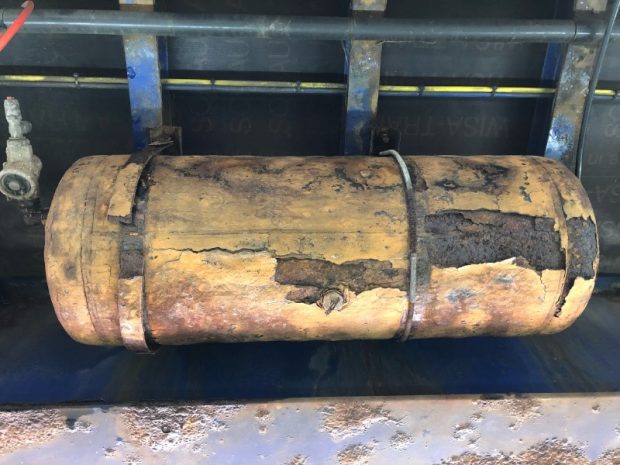 Driver: “Strap must have broken on the way here”

DVSA: “Has the tank corroded to that extent on the way here too?”

Just to be clear, this is an air tank for brakes. At high pressure. It’s held on by one strap and is rusting away.

None of us would like to imagine what would have happened if it had fallen off – even if the vehicle wasn’t moving. 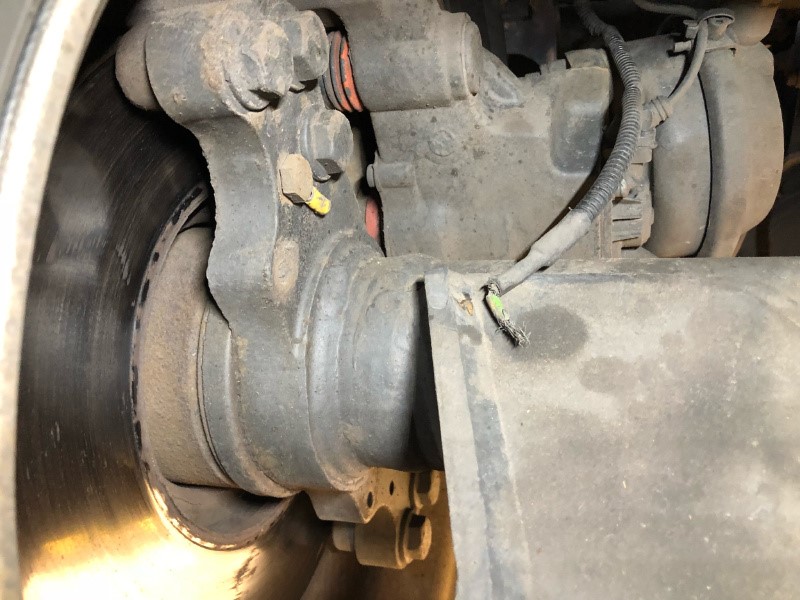 ADR is the European Treaty covering the transport of dangerous loads and this was in for a dangerous goods test.

Vehicles running to this standard probably should avoid driving around with a broken and exposed electric earth cable. This could cause a spark and ignite any leaking fuel or cargo. 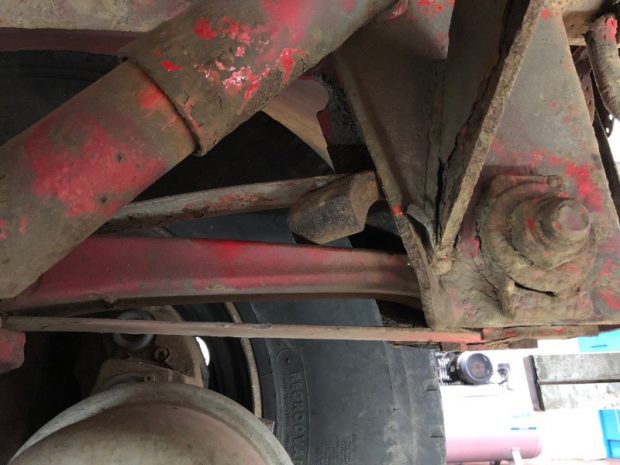 I had to prohibit it for a broken leaf spring.

It came back again a year later. With the same presenter/mechanic.

I found the same problem. But on a different leaf spring this time.

You can see by the colour of the metal it’d been broken for a long while! The tin retaining loop was holding the whole side in place.

At least the presenter knew what to do when I issued a prohibition again! 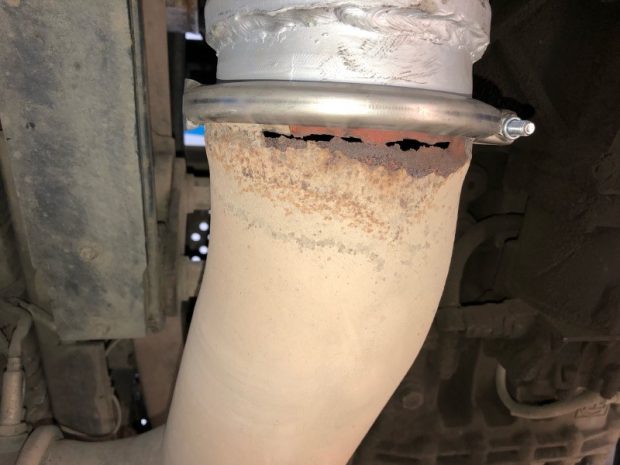 I failed this vehicle – from a main dealer - in the morning for a couple of defects, one being the holes in the exhaust.

It came back for retest the same afternoon. The driver was a bit reluctant to put it over the inspection pit.

“You can just bend down mate. You’ll see the new bit, it’s all shiny.”

I asked him to put it over the inspection pit as I wasn’t going to crawl all over the floor, and I needed a proper look.

It turns out that, as a main dealer, they had the failed section of exhaust in stock. Unfortunately, they didn’t have a replacement for the part that fell to bits when they replaced it!

Unbelievably, they thought they’d try it on anyway…

I and my colleagues test heavy vehicles every day of the year to help keep Britain's roads safe. Most pass their annual test. But we’re able to pick up on the dangerous ones, fail them and prevent them from causing harm to other road users.